I have a ten-year old.  We both love to read. Only she likes facts and I prefer fiction. This makes if quite hard when you’re at the biggest children’s book fair in the world (honest, BCBF really is that big) and you’re supposed to bring the little person back something “cool”. It might seem like an innocuous little word, but for a nearly fifty-something who doesn’t really do non-fiction, it could’ve been quite a headache. If I hadn’t discovered a cracker of wee book at the book fair, that is.   Suonare il Rock a Teheran [Playing rock music in Teheran].  Where fact meets fiction and a middle-aged mum has a chance of appearing cool with her kid.

Some brains were made to flutter freely through words, visit imaginary places, frolic in fantasy land,  hang on cliffhangers and marvel at twists and turns.  Others were made to seek out and retain information. I’ve always known which category I fall into. No times, no dates, no historical settings in my comfort zone. Until fact became fashionable, that is, and I had to pick up something cool at the Bologna Children’s Book Fair.

So, what does a moth-eaten mother who craves a half-hour of pure concoction give to a middle-grader who has not only read but also remembers who ran the fastest 100-metre hurdles wearing swim fins and why bottom farts are smelly.

I’d die without music, singing is the only thing that makes life bearable.

Well, they say go with what you know.. so I went to Bologna Children’s Book Fair and I didn’t head for the non-fiction shelves. I didn’t hang out in the discovery hall. I just did what you normally do at book fairs. I wandered. Into the Feltrinelli stand. And that’s where I found Suonare il rock a Teheran (Playing rock music in Teheran).

Before I tell you a bit more about it, let’s go back to little people. Little girls going on ten, to be precise.  My little lady’s a bit of a rockster and knows more about music than I do. Music is cool. She can download and cue a track even before I’ve remembered who sings it. She has a karaoke set in her bedroom,  wants drums for her birthday and sings in both Italian and English. So, a book with a girl singing on the cover and some dudes on the back had to be a good place to start my search.   It was selling as fiction yet it had the potential to be all factual and cool.

I flipped open the cover and read that the author, Vanna Vannuccini, is a correspondent for La Repubblica. She did the Berlin Wall, the Balkan wars then went to Iran for a few years. Benedetta Gentile, who did the illustrations, is also a journalist. This was beginning to sound promising.

It was a book with a female lead, set in a country that had been in the news a lot, written and illustrated by journalists. Definitely a win-win-win-win.  I think it was just a few days after the fair that the US finally struck the framework deal to restrict Iran’s nuclear programme. Topical stuff.  Lots of good selling points for a pre-teenster with an appetite for current affairs. Fact and fiction, all in one book.  Want to know more?

The book is set in Iran and introduces young readers to the 1975 revolution. The story is told through the voice of a teenage girl – Nilufar – who can’t settle in Iran after growing up in Paris. Music is the only thing that makes her life bearable, but it’s also an all-consuming passion that clashes with the brutal laws of the regime she now lives under. Rock music is frowned upon and women are not allowed to sing solo. Luckily Nilufar isn’t alone. Other young people like her are rebelling against the restrictions and have gone underground. So, Nilufar gets a rock band together. They’re invited to play at the British Embassy but before they get the chance, the Embassy shuts down and the gig’s cancelled. The band members drift apart, Nilufar goes back to Paris, and she wonders if she’ll ever get to play rock music in Tehran.

Apart from being a compelling story with plenty of ups and downs, this book is a little bit different from your normal middle-grade novel. It’s sufficiently exciting, plot-driven and relevant to be appealing to a 10-year-old, but also a clever combination of fact and fiction.  Information on Iranian history and culture is provided on 9-10 different-coloured fact pages which are carefully-placed so as to inform but not to interrupt.  And just to make sure an apparently didactic framework doesn’t put readers off, the illustrations inject a bit of brio and make the book look trendy enough to appeal to the image-conscious,  but still serious-enough to attract the young reader looking to learn something from their literature.

The moral of the story

So, did she like it? She most definitely did. And she can now add the Islamic revolution and the nuclear question to her collection of useful information. The things kids need to have a grasp of if they’re to understand the crazy world we live in. Oh, and the kind of thing that will be useful when we go on our next Scottish Bairns not Bombs demonstration! 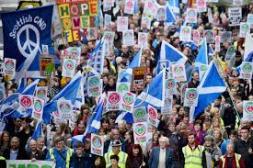 A great big jar of bloggyness

myshelfandmyself.wordpress.com/
ReBirth: The Pursuit of Porsha

Reconnecting with The Darkness in the Light

Looking at Italy through literature

"It's kind of fun to do the impossible." (Walt Disney)