Browsing the bookshelf in the newsagents the other day, a slim, orange book with a catching cover jumped out at me. That may have been because it was the only yellowy one in the lineup (fave colour) or because I’m feeling a bit more amenable towards cats at the moment, having just acquired a particularly fluffy feline friend of my own. Something drew me to it anyway, so I picked it up. And brought it home. Kind of the same thing that happened with the kitten. 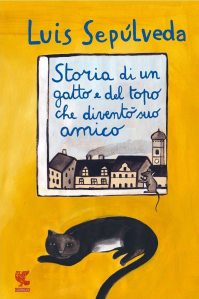 I know this is supposed to be a blog about Italian books, and the Chilean writer, film director, journalist and political activist “from the end of the world” writes in Spanish, but have a look at the title of today’s book: Storia di un gatto e del topo che divento’ suo amico.  It’s in Italian. Translated from the original Spanish.  The English version may be coming. Or it may not. Read on in if you’d like a sneak preview.  It really is a lovely story.

END_OF_DOCUMENT_TOKEN_TO_BE_REPLACED

A great big jar of bloggyness

myshelfandmyself.wordpress.com/
ReBirth: The Pursuit of Porsha

Reconnecting with The Darkness in the Light

"American Expat In Italy. A Hysterical Struggle With Language, Love, And Culture"-Probably Someone

Looking at Italy through literature

"It's kind of fun to do the impossible." (Walt Disney)